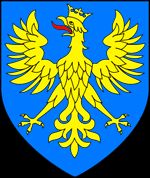 coat of arms of the Opole-Racibórz line of Piast dynasty 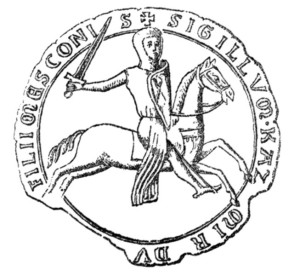 the seal of Casimir I 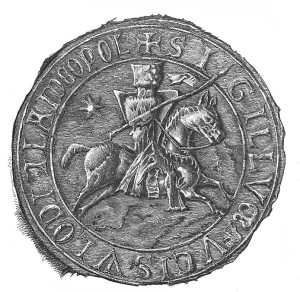 the seal of Władysław Opolski 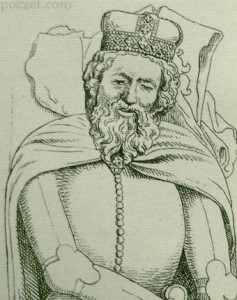 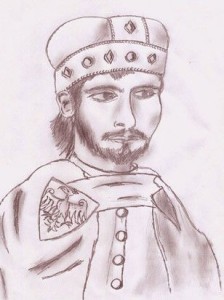 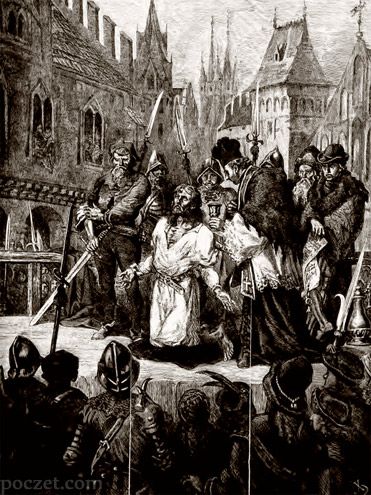 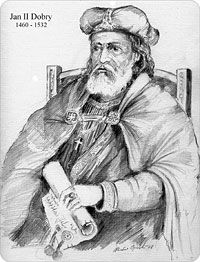 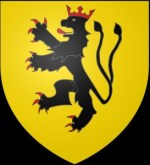 Prussian Tribute by Jan Matejk (1882)
George Hohenzollern-Ansbach with a hat in his hand standing behind Albrecht and Fryderyk, Duke of Legnica 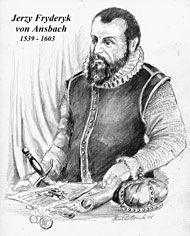 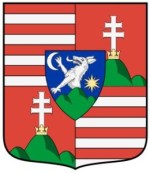 coat of Izabela Jagiellonka, the wife of King of Hungary 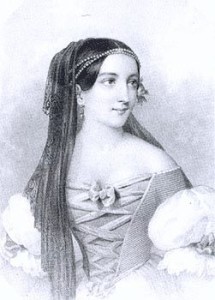 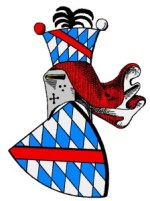 Henry von Logau. The youngest son of Mateusz von Logau, the owner of Niemodlin till 1568.

Caspar Pückler von Groditz (died 1584). Took over Niemodlin in 1572, buying it out from the Habsurg family.

Balthasar Pückler von Groditz (died 1591) – the owner of Niemodlin. In 1589 he commissioned the construction of the new north-west wing of the castle together with the gate tower. 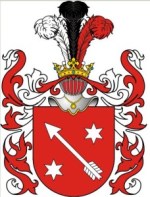 Weighardt Promnitz (died 1618) – husband of Polixena Puckler. He ruled the Niemodlin state from 1600 till 1618. He continued the Kontynuował przebudowę zamkureconstruction of the castle started bz his father-in-law. In 1610-1618 the north-east wing with the chapel, the south-east wing and four corner towers were constructed. 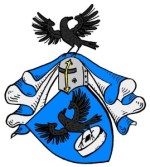 Ernst Poser (died 1624). The tenant of Niemodlin state in exchange for unpaid debts of Weighardt Promnitz. 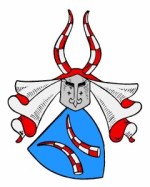 Assmann Nosistz. One Ernst Poser heirs. He ruled the Niemodlin state till 1648, when Seyfried II Promnitz forcibly seized the castle from him.

Seyfried II Promnitz (born 1607, died 1650). The son of Weighardt Promnitz and Polixena Pückler. He ruled the Niemodlin state from 1648, when following the court’s verdict he forcibly seized the castle from  Assmann Nositz with the assistance of Niemodlin townspeople and Opole militia. He died childless in 1650. 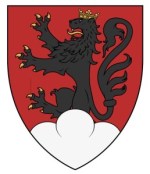 Bernard von Zierotin (died 1655). The Lord of Tułowice, the son of Mariana, the younger daughter of Balthasar Pückler adn the sister of Polixena Promnitz. He ruled Niemodlin from 1650 to 1655.

Michael von Zierotin (died 1779). Younger son of Franz Ludwig von Zierotin. In 1731 – 1748 a co-heir of Niemodlin together with his brother Franz. In 1748 after the inheritance division became the only owner of Niemodlin and Tułowice. After his brother died childless in 1755 he also inherited the Moravian properties of the family and moved to Valašskie Meziřice. He died childless in 1779. In his will he transferred  Niemodlin and Tułowice to Jan Nepomucen II Carl Praschma, the son of his sister Marianna. 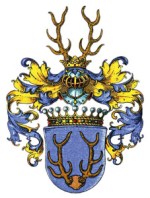 Jan Nepomucen II Carl count Praschma (born 1757 – died 1822). The son of Marianna von Zierotin and Jana Nepomucen Praschma, the eight of their 14 children. He took over Niemodlin and Tułowice in 1779 based on the will of Michael von Zierotin, the brother of his mother. He was educated in law in Vienna. He loved literature nad music, collected an extensive library. In 1787 he started renovation of the castle. He died in 1822 and was buried in the castle’s chapel.

Friedrich I Graf Praschma Freiherr von Bilkau (born 1786, died 1860). The son of Jan Nepomucen II. Inherited Niemodlin state from his father. He took part in a war against Nepoleon I and was injured in the battle of Jena (1806). In 1846 he invited  Fryderyk Wilhelm IV, the king of Prussia, to visit the Niemodlin castle during his trip to Opole.

Friedrich Wilhelm Franz Nikolaus Ernst Leopold Karl Johann Nepomuk Lazarus Graf Praschma von Bilkau (born 1833, died 1909). The son of Fryderyk I. He studied in Berlin and as a zoung man traveled a lot in Europe and Africa. He was an active member of a catholic Centrum Party and in 1866 became a member of lower chamber of Prussian parliament. In 1879 became a member of German parliament. Died in Niemodlin in 1909.

Johannes “Hans” Nepomuceno Maria Friedrich Emanuel Kajus Piusa Hubertus Graf Praschma Freiherr von Bilkau (born 1867, died 1935). The son of Fryderyk II Wilhelma. He was a lawyer and a Prussian army officer in 1890 – 1895. From 1902 till 1918 he was a member of Reichstag and Prussian parliament. From 1921 to 1930 he was the chairman of the German Centrum Party in Silesia.

Friedrich III Leopold Maria Walentin Emanuel Oscar Graf Praschma Freiherr von Bilkau (born 1900, died 2000). The son of Henry Praschma. He owned Niemodlin till 1945, when he moved to Kapellen in Germany. He died in 2000.

1978-1989 District Board of Correctional Facilities